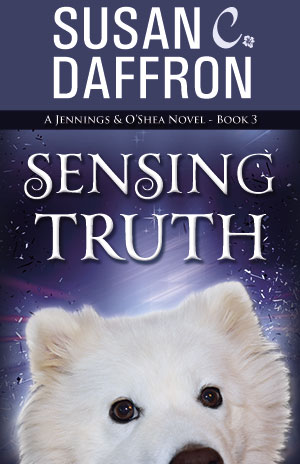 The long and winding road often leads to unexpected places.

Meg Jennings has been on an adventure of a lifetime with Riley O’Shea. Together, they’ve uncovered some secrets and solved some mysteries, so they have a better understanding of why their senses went haywire.

To figure out the rest of the story, the two must infiltrate a remote compound to investigate the nefarious activities of the residents. But first they have to come up with disguises and figure out a way to sneak in their fluffy white dog, Zelda, too.

While Meg faces her fear of snakes, slugs, and scary oversized beetles in the garden, Riley works to get an ancient vehicle, aptly named Lurch, to run again. Although espionage can be a filthy job, the pair learn a lot about themselves, their families, and each other as they work to find out what’s going on. But when their investigation steers them toward a high-tech conspiracy, both their lives and their hard-won knowledge could be eliminated permanently.

Sensing Truth is Book #3 in the Jennings and O’Shea series. The correct reading order is: