Like most novels, Chez Stinky has some autobiographical elements. Without giving away spoilers, here a few things that are true at least to some degree.

In 1995, Susan was a technical writer and really did have a conversation about ginko with her boss. It was not one of the high points of her writing career. 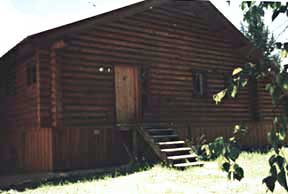 The house is loosely based on Susan’s house when she moved into it. And yes, the stairs really were covered with blue shag carpet because the decaying plywood was really slippery.

Tessa is based on Susan’s dog Tika who was tested for “hyperkenesis” otherwise known as doggie ADHD. Over time, Tika turned out to be a wonderful dog, but the early years were rough.

Tessa’s leash arrangement is based on a real thing. (

Susan thought of using a backpack to slow down Tika long, long before the Dog Whisperer was on TV.)

Anyone who has lived in a small town has probably experienced the glacial speed of the post office. That is just as true in Sandpoint, Idaho as it is in Alpine Grove. If you want to meet people, go to the PO.

The story of the Saloan is loosely based on a bar in Sandpoint called the Tam o’Shanter or “The Tervan.” 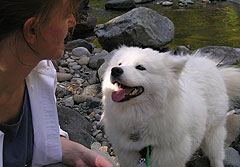 For those who have read the second Alpine Grove novel, Fuzzy Logic, it probably comes as no surprise that Michael’s dog Swoosie the Samoyed was inspired by Susan’s own Samoyed named Fiona. (However, Fi would like everyone to know that she would never be as naughty as Swoosie!)