Vegan Success is a Book
for Vegans by Vegans

If you have ever stood and stared stared forlornly into the refrigerator looking for inspiration, we know how you feel. Our names are James Byrd and Susan Daffron and we have been vegan since 1994.

As vegans ourselves we’ve been there. Although we were “red meat” vegetarians earlier, we’ve both been completely vegan for a lot of years now. In that time, we’ve puzzled over complex recipes that would take us all day to make. And tried seemingly endless bland, boring recipes that taste like dirt. We’ve also made some truly awful concoctions all by ourselves. (Like they say, you learn from your mistakes!) This book is the result of many years of trial and error. Now, even our meat-eating friends come back to the table for seconds and thirds!

We wrote Vegan Success because since we first went vegan, we have had trouble finding easy recipes that actually work for everyday cooking. Over the years, we scribbled down notes, ideas, tips, and recipe adaptations, so we wouldn’t have to keep “reinventing the wheel” on those nights when we couldn’t figure out what to make for dinner. Finally, we compiled them into a book.

Vegan Success is the result of our years of cooking trial and error. (Yes, that means we already made quite a few nasty culinary mistakes, so you don’t have to!)

When we became vegan, we didn’t know what we know now. It took us years to figure out all the tips and tricks we use now for speedy vegan cooking. Before we went vegan, we relied on convenience foods. We struggled to come up with meals and ate a lot of junk. Not surprisingly, we also gained weight and popped antacids like they were candy.

Back in early 1994, we were working long hours at our jobs as a programmer and a technical writer. Although both of us had quit eating red meat years before, we were basically “non-mammal eaters” at that point.

Every day, we would come home from our nerdy cubicles exhausted from another long day slaving over a keyboard. We’d flop down on the sofa and ponder our dinner options. (“Yuck, I don’t feel like cooking. I’m hungry. What’s for dinner?”) One or the other of us would amble into the kitchen, open the freezer and peer inside.

No matter how long we stood, stared, and hoped for something better, the almond refrigerator yielded no surprises. We found our standard staples of frozen dinners: stuffed shells, black bean burritos, ravioli, tamales, enchiladas, and veggie lasagna all hermetically sealed into their plastic enclosures.

Although we were eating better than some people do, we weren’t eating well. Over the years, we’d gained weight and our meals were uninspiring at best.

Everything changed that summer. Susan had to go out east to help her mom with a 1,200 mile move from Maryland to Maine. She left James with a book called Fit for Life by Harvey and Marilyn Diamond, which a work colleague had loaned her the week before.

Although Fit for Life actually isn’t about being a vegetarian much less vegan, it talks about how to eat foods in the right combinations to lose weight. Concepts like “food combining” and “natural hygiene” were not new ideas, but they were new to us.

We decided to try the eating methods for one week using a vegan approach instead of straight food combining. We felt so much better that the “vegan experiment” continues to this day. A cool side effect was that we also lost weight (James lost 20 pounds and Susan lost 10).

Secrets Revealed from “The Recipe Pile” 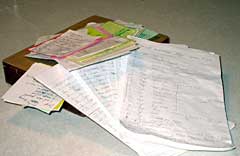 We quickly realized that although Fit for Life has a lot of recipes, many of them are not ones you want to tackle every day. So we started collecting vegetarian cookbooks. Over time, and through much trial and error we started to find recipes that were…

…for us to make on a regular basis.

Because we didn’t want to scribble all over our nice new cookbooks, we started up a rather informal pile of  our own recipes.

Finally, we decided to take all the recipes from our notes, scraps of paper, and the “recipe pile,” update them, clean them up, and compile them into a cookbook. Vegan Success is that cookbook and is the result of years of experience and feedback from other people.

Order from Amazon.com. If you buy other books at the same time, you almost always can save money on shipping by taking advantage of Amazon’s Super Saver shipping offer.